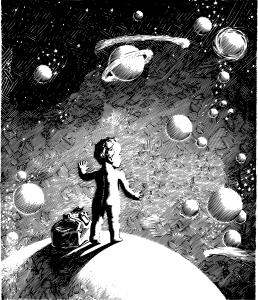 “Proclaim God’s marvelous deeds to all the nations.”

I am a complete novice when it comes to politics and the process of running a political campaign. I have never been involved in politics at any level, with the exception of helping my friend become president of our senior class at college. Our main strategy at that time was to plaster campaign fliers on every tree and lamppost across campus. It actually worked surprisingly well.

Thinking I would test the concept of running a political campaign for Jesus, I printed up some business cards with His picture on the front, and my website on the back, and got myself into Times Square, New York City. My plan was to distribute the cards to random pedestrians, and assess their reactions. I discovered three things:

Not a single person would take a card from me, or even make eye contact.

When I placed the cards on public benches and tables, they were immediately removed and discarded by custodians working in the area.

If I placed a card on a table that was occupied, the reaction was often ridicule or outright hostility.

I somehow managed to place about 250 cards on public seating locations in Times Square before I lost my nerve and hurried home.

Over the next couple of months I got “hits” on my website from the following countries: United States, Brazil, Canada, India, Italy, Argentina, Portugal, Australia, Philippines, United Kingdom, Chile, Mexico, Albania, and Sri Lanka.

I won’t even try to correlate the hits on my website with the distribution of business cards, but I must say I was encouraged by the apparent interest in Jesus shown by people across the globe.

When I was 30 years old, I left rural Connecticut and went to live in a Catholic church in the heart of Newark, New Jersey. Joining a number of other zealous young men and women in a program of Christian renewal, we often fanned out across the inner city neighborhoods inviting people to our church. Although some of my new friends may have been effective evangelizers, in my case I believe the local residents of Newark tended to look on me with downright pity. The Lord, in his great wisdom and mercy, arranged for me to meet a lovely young woman and get married, before I could do any real damage in the missionary fields!

Subsequently, my wife and I served on several parish missions as part of a team that would travel up and down the east coast seeking to renew parish life. We would give our witness, lead the music, pray over people for healing, and try to answer people’s questions as best as we could. Cynics might say we were “preaching to the choir”. Evangelicals call it “refreshing the saints”. Pope John Paul II called it “providing ongoing catechesis for those who are ‘fervent in their faith'”.

But I never encountered a single person who was being exposed to Christianity for the first time.

Even now, many years later, I am still not convinced that I have ever been involved in actually spreading the gospel, in the sense of expanding the Kingdom of God.

In my mind, expanding the Kingdom must somehow involve  breaking new ground. We can’t survive for long on last year’s success. We need an influx of new believers each year if our church is going to thrive.

In a different sphere, but in the exact same sense, every political campaign needs new voters to successfully win an election. They can’t just rely on the party regulars to supply the necessary votes for a victory. They have to appeal to the general public in order to increase their voter base. I ask myself how modern political campaigns get their message out to the masses? One technique that is familiar to many of us is the use of mailing campaigns. Postcards and flyers arrive in the mail describing a candidate’s qualifications, (and the opponent’s shortcomings), in the hopes of educating the electorate. Sometimes these campaigns target specific people at specific addresses, but at other times they are simply addressed to “Local Postal Customer.”

Every Door Direct Mail, or EDDM, is a service of the U.S. Postal Service developed to make mass mailing both easy and inexpensive. No postage permit is required, and no mailing lists are needed. Using their mapping tool, I can hover over an area that I am interested in, select an entire postal route, (typically around 300 households) and arrange for my campaign literature to be delivered to the “local postal customer “at the low cost of $0.18 per mail piece.

Let me repeat that: I can deliver my campaign literature (in this case the Gospel of Mark) to an entire postal route of 300 households, for about $50.00 postage (plus the cost of the printed material). Since each household typically consists of at least 4 people, I will be effectively reaching 1200 people with my candidate’s message every time I conduct an EDDM mailing to an individual postal route.

Unless I’m mistaken, delivering an up-beat message through the mail to prospective voters is probably the most efficient and successful tactic that a politician can employ to win votes during an election. Likewise, a short and pithy biography of the candidate may be just the ticket to a successful campaign. I’m certainly hoping that is the case in this most crucial of all elections.

My next post The Power To Govern explains why our campaign is so crucial.

This site uses Akismet to reduce spam. Learn how your comment data is processed.

purpose of this blog

For the purposes of this blog, I am treating the mission of Jesus Christ as if it were a political campaign, and Jesus himself as the preeminent candidate seeking the highest office in the land.

I know this doesn’t even come close to describing the mystery of Christ’s redemption and love for us, but it helps me to focus on the problem at hand.

The problem at hand can be described in political terms: The current world population as of 2017 is approximately 7.2 billion individuals.

Clearly our campaign needs new votes if it ever hopes to win the election.